It was a nice surprise to find issue #13 of The Future Fire posted online today.

Editor Djibril al-Ayad opens this issue’s introduction with a line from recently departed Prince, from his song 1999, which adds an extra dark tone to an already dark issue.

I will scribble a more detailed post once things settle down with the renovation and the move and I have more than three frakking hours of computer time per day, but for now I would like to brag all over the web about my story included in this issue (as any self-respecting cat). “Vengeance Sewn with Fey Cord” is a story very dear to my heart, one spawned by the infamous phrase “weak as women’s magic.”

So I set out to argue that women’s magic is anything but weak. In my eyes, it is simply different and this, in some situations, makes it part of the Other. And those who underestimate this or, worse, try to suppress it, are in for a nasty surprise. A bit too nasty, in the case of this story.

Last but not least, there’s awesome art accompanying this issue and I purred like a happy (and somewhat bloodthirsty) kitten when I saw that the cover art is inspired from my own story.

I hope I intrigued people enough to make them check it out and (why not?) offer some thoughts on the story and the issue as a whole.

Long time no post here. I’m trying to remedy this, and decide whether I’ll keep this page or switch to a free blog-type thingy, because maintaining it won’t be easy in the near future.

After a looong break from writing, I’m happy to announce that I have stories upcoming in various publications in 2016, and I hope there will be more to follow. So far, here they are:

“They Came Bearing Dangerous Gifts” in Space and Time Magazine, issue #125, out in March 2016.

“Madonna Mermaid” in the Fae Visions of the Mediterranean, from TFF.

“Vengeance Sewn with Fey Cord” in the Future Fire.

“The Promise of Spring” in the Procyon Science Fiction Anthology from Tayen lane Publishing.

“Even Death” in Cast of Wonders.

There will be more detailed post on each one of those stories, closer to their publication date, as Life permits. *sigh*

Yet an other birthday under my belt, another anniversary with the guy, and a new kitten at home to replace the four I lost last year (and he's doing a great job at it).

We're fixing my old home, also known as Purrdor, to move there within the month, because things are still tight and we're downsizing to the best of our abilities. Meanwhile, I don't hang around LJ anymore, but my Facebook account here gets more traffic and updates (and cat photos, duh), in case any of my Friends list want to catch up.

Take care, all of you.

Under a cut because I'm a begging beggar who begs.

( Collapse )
And happy holidays to all.

Around this time last year, the bf and I adopted a kitten: How did we end up with a sheep at home, a year later? 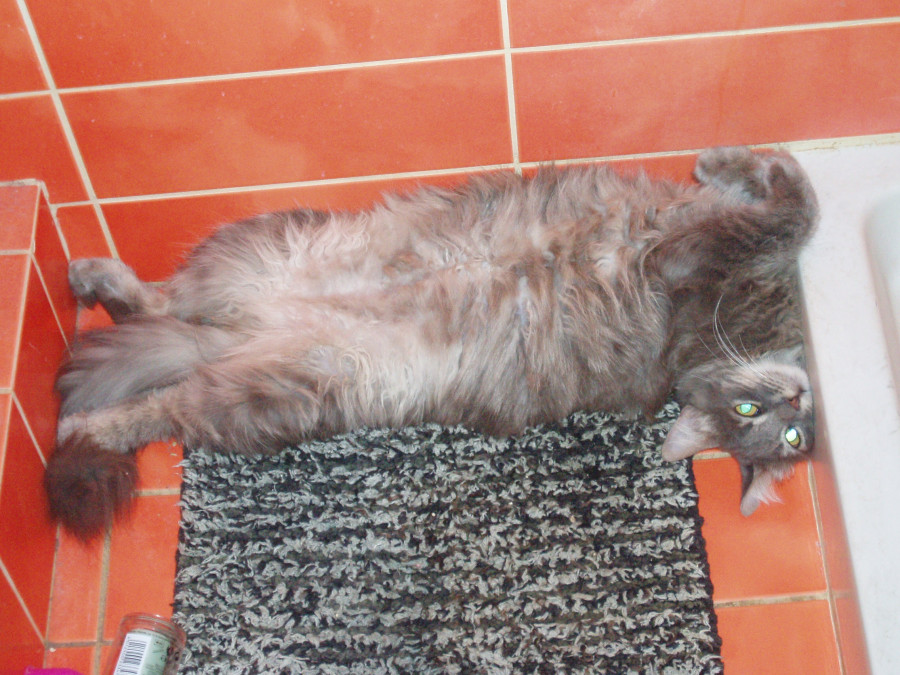 The Quiet Shelter There anthology is a collection of SFF stories to benefit the Friends of Homeless Animals, from Hadley Rille Books.

It includes my own little story “Make None to Weep. It is set in ancient Egypt (what a surprise) featuring the cat Nedjem and his High Priest Ankhu. In this, Ankhu, in the process of aiding the ghost of a mute slave, gets something many of us can only wish for: closure to the loss of a beloved pet. The title comes from the Declaration of Innocence from the ancient Egyptian Funerary texts: Hail, Her-f-ha-f, who comest forth from thy cavern, I have made none to weep. In my mind, this single line is more profound than most others written afterwards, in any religions. And methinks it applies largely to animals, because those are truly innocent among us.

*glances at kitten stalking the sparrows outside*

I suppose it applies to cats too. Unless you’re a sparrow. Or, gods forbid, a roll of toilet paper.

In any case, those of you who can afford it, please consider getting a copy. It’s for a good cause. And it’s a good book.

So, after a loong time, I decided to add a few things to my poor neglected website. With four new stories due to appear in magazines in the near future, it was long overdue.

But did I remember how everything (or, rather, anything) worked? Rrrright...

Anyway, I've managed to add a new page: A Cat and his High Priest. With so many stories about Nedjem and his humans, I thought it would be a good idea to have a page about them. So. The basics are there, as far as text goes. I would have liked to add some photos, but I'm not quite sure how it all works these days, regarding posting photos (rights, permissions, that sort of thing). That would take some time to research, and I really need to finish some stories first. (Ideas, anyone?)

And, sometime in the future, I'd very much like to find an artist and commision some original drawings about those characters. Once I'm not as poor as a Greek cat, that is...

…and look what the cat dragged in.

A writer who forgot how to write. And now struggles to remember.

Thankfully, although I took a long break from writing, I didn’t take a break from reading, so everything came back to me after a while. Jumping right in with Liberty Hall’s Flash Challenges every weekend helped a lot too.

The difficult part came when it was time (at long last) to ship stories out to magazines. See, my old PC, where I wrote everything until this past February, sits alone at home in the company of my poor neglected kitties. Everything I wrote or edited since February was done at the bf’s home, on my new laptop, and its unfortunate predecessor, who didn’t survive its second motherboard transplant. On this new laptop I have no Microsoft Office and, given the situation here, I don’t think I can afford to buy a copy any time soon. So, I have to work on Libre Office. Which is fine, as far as writing goes.

And then comes the time to format the story to Standard Manuscript Format.

Ohai thar, my old pal Headache. And I see you’ve brought your cousin Migraine along.

Not only had I totally forgotten how to do that in MS Word, everything in this new software is located elsewhere. The first time I tried to format a story to send it out, and mere hours before the deadline at that (it was the cat’s fault I was late, really. No, really) it took me two and a half hours to do what I used to do in ten minutes tops.

I think the best way to wrap up this attempt to revive this poor neglected blog is to mention about two of my stories that were published during my long absence, and both very dear to my heart.

The first one is “What now, Callisthenes?”, published in the Triangulation: Morning After anthology. Written in second person POV, an experiment that apparently worked, this story deals with a popular Greek legend regarding the fate of Thessalonike, the sister of Alexander the Great. It was one of the recommended stories in Tangent Online’s 2012 list, and had an awesome review in Future Fire.

The other one is still very dear to my heart: “Ouroboros”, in the Other Half of the Sky anthology. There’s too much I can tell about this one that it requires its own post, and the anthology’s editor, Athena Andreadis, has my eternal gratitude for believing in the story.

I have four more stories lined up for publication, but each of them will have its own post, once I know more about the specifics.

Well. It’s good to be back. So I guess now I can go and gawk at the open document and the unfinished story I’m supposed to be working on.

It is, of course, the cat’s fault.

Yesterday, it came to my attention via

just_ann_now, that one of my first online friends from the LotR fandom,

windswept1, had passed away.

This saddened me and affected me more than I expect, especially considering that we hadn't been in touch for a long time noe, me with RL taking over in many aspects, and her hers, no doubt.

She, and a few other online friends I met through HASA/LotR fandom back in 2003, meant a lot to me, more than they probably knew and possibly more that I could ever express. Back then I was lost. I didn't know who I was. I was stuck in a job I hated, and I had little interest in life in general back then, due to a series of unpleasant events. And then fan fiction came into my life, and those few precious people, and suddenly I knew who I was, and who I wanted to be: a writer. No matter what kind of shitty day I had at work, it didn't matter, because that person wasn't me. The real me would come to life when I'd go home and turn on the PC, back in those dial-up days, and chat and read and write.

Life moves on, and so we did, all of us. And, sooner or later, it ends. But what remains a fixed point in time, one that no death or time can take away, was the change those precious people brought to another's life.

Sleep well, my friend. You will be missed.
Collapse